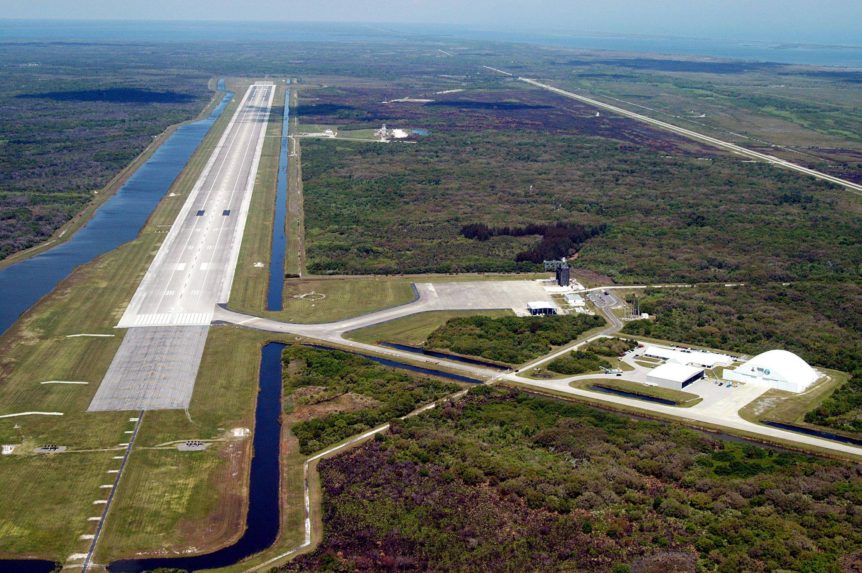 March 11 may prove to be the day when the plans to make Kennedy Space Center a shared spaceport showed the first practical success, according to some of the people who coordinated five unique operations at the Shuttle Landing Facility that day.

The SLF hosted NASA’s Morpheus lander free-flight test that day, along with a NASCAR team conducting aerodynamic testing, the Starfighters company running its modified jet fighters through afterburner evaluations, and medical evacuation helicopters conducting safety checks and procedure tests – all while the facility itself underwent its own construction work.

“I think it was a glimpse into the future of Kennedy Space Center,” said David Cox, Partnerships Development manager at Kennedy. “To me it shows that we are really turning the corner from being a government-only focused space center to really being a commercially shared space center. It really is a huge shift in the culture.”

“We all had the same goal: let’s work together,” Bohmer said. “I feel like we’ve gone to another level and we’ve proven that we were able to pull off something we thought we could do. Precise coordination created a ‘win-win’ for everyone during the three-day testing session.”

The successful formula is expected to be the basis for policies and procedures that can be repeated as the SLF takes on increasingly diverse users under Space Florida, which is in negotiations to operate and maintain the unique national asset.

“The beauty of it was that everybody was willing to give a little so no one had to give a lot,” Cox said. “That willingness made it so everyone could accomplish all of their objectives. I think the first thing that we did was establish a cooperative spirit, and we had extremely effective communications and that allowed us to do so much with just a short period of time.”

Typically, the runway hosts a single user each day with the occasional dual mission, such as an aircraft arriving. It will allow aircraft testing one day, car runs another and experimental rockets or unmanned aerial vehicles on another. Even that is a shift from just two years ago.

“Its primary purpose was to bring back and land orbiters and now that we’re not doing that, you can find some more uses and some unique uses that you couldn’t find before because you had to be available at any time for a shuttle to come back,” said John Graves, who coordinates operations at the SLF for NASA’s Flight Operations department.

The team of people involved in the process credited an intense focus on communications and flexibility with getting all the work done.

“They basically let us all work within our own structures instead of saying this is how it’s going to be,” said Rick Svetkoff, owner of Starfighters.

The users employed creative means to allow each other the room they needed. For example, the Morpheus project, based at NASA’s Johnson Space Center in Houston, is in the middle of an intense and successful test flight campaign that calls for increasingly ambitious free flights by the unmanned lander in an area north of the runway. Fueled by methane and oxygen, the Morpheus lifts off like a rocket, then goes into its automated landing profile for descent to its landing pad. The safety requirements prohibit anyone from being within about a mile of the craft when it reaches flight pressure and makes its flight.

Accommodating the safety needs, which remain paramount to all the operations at the SLF, meant drawing down the time the NASCAR team had for its runs. An adjustment of lunch time by the auto team along with an adjustment of flight time by Morpheus meant no time lost or missed objectives for either.

“In the end we got everybody happy with the idea,” said Greg Gaddis of NASA’s Morpheus team.

The number of companies anticipating using the runway grows seemingly by the day with several mentioning it as a possibility for launching flights into space straight off the runway and gliding back to it, or using the runway’s vast width and 3.2-mile length to host a gigantic carrier aircraft lifting a booster to altitude for a space launch.

“We typically host three or four people wanting to take a look at the SLF for one use or another, so there’s a lot of interest in coming out here,” Graves said. “Hopefully what we did becomes a common occurrence and not that big of a deal.”

The lessons also may be incorporated into the adaptation of Kennedy’s other research and development facilities as they undergo their own unique adjustments to host more commercial uses.

“No matter what facility you’re in, it goes back to knowing the needs and working with the customers to get them what they want and make everybody happy,” Graves said. “These lessons are applicable to any facility that has multiple customers.”

The uses could be just as diverse, as well, as evidenced by the variety of companies that have signed agreements or contacted Kennedy to use its research and development resources.

“I think the SLF is probably one of the most conducive to these kinds of sharing activities,” Cox said. “Another facility is going to be the Vehicle Assembly Building one day. I’m sure the Space Station Processing Facility could end up with a similar day-in-the-life, if you will, because it has a very open configuration that can be tailored to different customer requirements.”