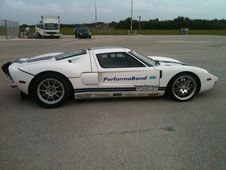 Johnny Bohmer drove this Ford GT to record speeds.Image above: This Ford GT has been extensively modified and owner Johnny Bohmer brought it to the Shuttle Landing Facility at NASA’s Kennedy Space Center in Florida to evaluate the changes. Photo courtesy of Performance Power Racing.

The certification from Guinness. Image above: A Guinness judge confirmed the speed record of the Ford GT and certified the achievement. Photo courtesy of Performance Power Racing.

A modified Ford GT set a world record during testing June 16 and 17 when Johnny Bohmer reached 223 mph on the runway of NASA Kennedy Space Center’s Shuttle Landing Facility. A Guinness World Records judge authenticated the accomplishment, confirming Bohmer’s place in automotive history, along with Kennedy’s role in the achievement.

Bohmer’s Performance Power Racing modified the car and was testing the suspension and aerodynamic coatings at the runway. The record is the first in the new Guinness category of standing mile for a street-legal car. That means Bohmer began from a standstill and revved up to speeds faster than the space shuttle’s average touchdown speed.

Built for spacecraft returning from orbit at high speeds, the three-mile long concrete runway is becoming a preferred testing ground for drivers and racing teams. Joe Gibbs racing, which competes in NASCAR events, has used the runway for evaluations, as have Indy Car teams.

All pay rent on the facility for each day they use it and the companies sign Space Act Agreements to use it for at least eight days a year, said NASA’s David Cox, Partnership Development manager at Kennedy.

The world record came as a bit of surprise for Bohmer and his team because it came during some of the hottest times of the day, conditions that are not typically kind to supercharged engines.

“The hotter the ground gets, the slower your car will go,” Bohmer said.

On the other hand, the Performance Power Racing group, based in West Palm Beach, Fla., began setting faster marks on their cars as soon as they started revving them up on the runway. For example, the team brought a Dodge Challenger and drove it to over 170 mph, beating the previous record for that model by almost 30 mph.

“First time out, I was very, very surprised the car went that good,” Bohmer said.

From NASA’s perspective, the testing has to meet certain criteria such as performing true aerodynamic evaluations, Cox said. Part of the agency’s mission now is to move research ahead that can improve fuel mileage for vehicles, so tests on products that reduce drag on a car help meet that criteria.

That’s where Jeff McEachen comes in.

McEachran was testing a coating called “PerformaBond” that fills in the microscopic pores in paint and makes the car move through the air that much smoother. Testing is showing a one- to two-percent drag reduction, McEachran said.

“The great thing is that it all coincides, NASA is high-tech and cutting-edge and that’s exactly what we want to do,” McEachran said.

Although they are street-legal, Bohmer’s Ford GT and some of the other cars he brought are equipped with drag chutes to help slow them down at the end of a run, but the shuttle runway is so long that the drivers don’t have to use them.

“On the shorter tracks, they have to deploy it every single time and repack it,” Cox said. “Here they don’t have to do that at all.”

The International Mile Racing Association set up four tracks with timing gear so they could take advantage of the wind direction for their runs during their two days at the Shuttle Landing Facility. IMRA surveyed the runway and recording official times.

When the company returns, much of their legwork will have already been done and they can spend more time testing.

“Hopefully we can get General Motors and Ford involved and we can use some of NASA’s camera equipment and other equipment,” Bohmer said. “We have a lot of good ideas.”